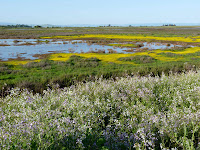 It was a beautiful spring day today. The hills and grasses are still mostly green, assisted by lots of rain this year. Even so they'll start turning the color of dried straw in a week or two. I worked my way West to East today -- walking first up the Redwood Highway (a frontage road to Highway 101, shown as double yellow lines above on the map). I was surrounded by cicadas making noise for a few minutes. I was only able to find/see two of them; but it sounded like there were many more "singing" to each other. I also passed a number of interesting looking small businesses. Several catered to pets, with promises of luxury cat boarding; bed and biscuits for dogs; and other services.

Next, I then followed the trails (red lines) to John F. McInnis Park -- where there were lots of birds, and flowers in bloom. There were kayakers on the water, and several people out walking their dogs.
I walked around the first of two large loop trails (the bottom of the two).  I'll walk the upper loop next time.

I also felt like I was living in a Dr. Suess book today, as I saw a vole in a hole (pictured), some quail on the trail (also pictured), and a duck in some muck. I did not see a cat in the hat, until I came home; and there I discovered one cat sitting on/in my hats.