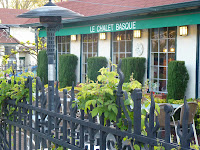 Today, I continued walking West along N. San Pedro Road, an area that appears as double yellow lines (in upper right corner of the Bay Trail map insert shown above). I started at Buck's boat launching and storage turn-off/sign, where I'd left off last week. By the end of the night's walk, I reached the intersection of Civic Center Drive and N. San Pedro Road, near the Marin County Civic Center.

After walking along some pleasant stretches of water, lined with reeds and grasses, where a duck was playing camera-shy, I had a very nice dinner break at (Le) Chalet Basque Restaurant (at right), in the Santa Venetia neighborhood of San Rafael, at 405 N. San Pedro Road. Having covered a few miles at that point, I felt justified in having a full meal, including a nice chocolate dessert and small glass of port. 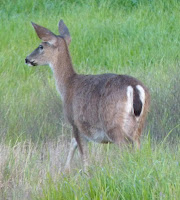 After dinner I continued walking, said hello to a deer (right), looked unsuccessfully for wild turkeys, and then marched on toward Highway 101, until it became too dark to see anything.

I tried to take a picture of the architecturally striking Marin County Civic Center; however, this hazy silhouette (below, right) doesn't do it justice. 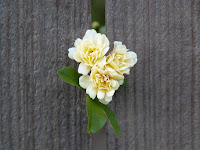 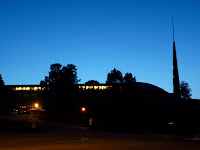