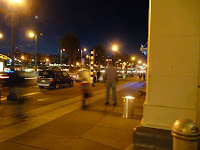 This evening, I was up in San Francisco, setting up for my "Walking the Bay" photo exhibit a few blocks west of the Bay Trail at the Canessa Gallery.

A note about the evolving nature of trails: Canessa Gallery is situated inside a historic (old printing company) brick building. A few hundred years ago, before considerable amounts of Bay fill (including parts of old ships left behind from the Gold Rush from the mid 1800s), this gallery would have been close to the Bay shore (perhaps near/on an old version of a Bay trail). So, it's a perfect location for a show and talk about walking the San Francisco Bay Trail. 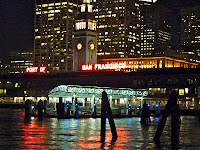 After a stop at the gallery, I headed east on Washington Street to The Embarcadero, and walked to the public promenade area along the waterfront, on a combination of paved and wood planked sections. Most activity was blurred in these night photos taken on the move. 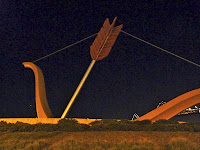 I strolled around the boardwalk closest to the water as part of this section of Bay Trail that is shown as a set of double red lines on the Bay Trail map; and I enjoyed a view of city lights reflected on the bay and the Bay Bridge.


The Port of San Francisco building at Pier 1 was closed; but I could see the Bayside History Walk, and large photos on the walls behind glass, that I'd seen on my first round-the-bay walk in 2009. I recommend a stop here. 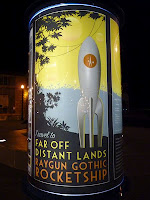 By the time I reached the Ferry Building, a great historic landmark, it was too late for a snack. This was a shame, as the place was/is stuffed with small shops and vendors selling delicious food items. I made a trip there a few days ago, to make sure I didn't miss out on the chocolates, macarons, salami, and the Cowgirl Creamery Mt. Tam cheese (which I plan to serve at my exhibit, as I have dozens of photographs of this north bay peak - from different angles and locations on the Bay Trail).

I passed several large public art pieces, sculptures -- such as the gleaming silver retro, Raygun Gothic Rocketship; the giant bow and arrow; and various memorials (black and white posts with tiny names inscribed on them from the past). 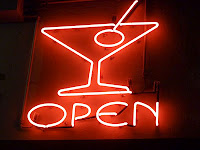 If you count neon signs as public art, then I suppose I should count the cocktail (Open) sign at the Hi-Dive bar.

Wildlife Sightings:
2 sea gulls; too dark to see anything else 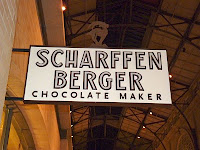 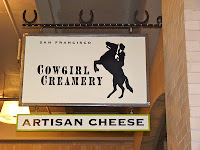