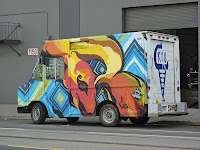 This afternoon I stopped by Kika's Treats in the Dogpatch area of San Francisco about some sea salt caramels (with S.F. Bay salt) to serve at my upcoming "Walking the Bay" photo exhibit at Canessa Gallery in San Francisco. Dogpatch is a great, creative area for good food and chocolate finds.

After the Dogpatch stop, I had a good walk along Illinois Street (shown as double yellow lines on Bay Trail map). Technically, double yellow lines are not part of the Bay Trail, and consist of surface streets that are generally walkable. Today's walk was mostly concrete sidewalks with short stretches of paved asphalt. 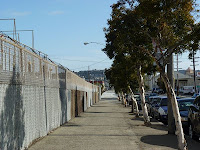 I first stopped at Warm Water Cove Park. It was a small park by the bay shore, with small clusters of orange poppies in bloom, and views of some older industry infrastructure. 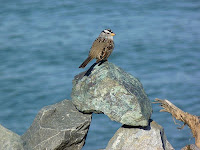 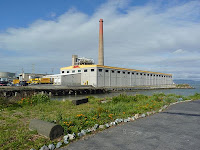 At the park, I noticed stone stacks and sculptures of various animals and a lizard -- similar to what I'd seen at Heron's Head Point in Hunters Point a few years ago. While I was admiring these "volunteer" art works, the sculptor himself (Porfiero Vasquez) approached me; and we started discussing his work. He said he was, in fact, the person who had done the larger rock lizard sculptures at Heron's Head awhile back. Not sure why they were subsequently removed. I used my limited Spanish to find out a bit more about all that he had created in Warm Water Cove Park. He said he preferred spending time here vs. being on the streets. He also showed me wire sculptures he had built from discarded/found materials, wire, and other bits and pieces. He was a very creative man. 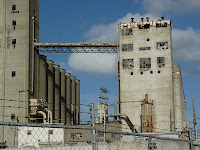 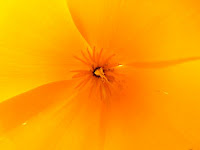 From the park, I headed south on Illinois Street, over the Islais Creek channel bridge (short red section of trail on Bay Trail map). I walked a bit further, to the intersection of Illinois Street and Amador Street, before turning around and heading back (north) to the Dogpatch area for a dinner break at Serpentine restaurant and bar.