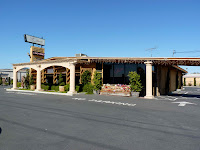 This afternoon, I stopped at Ristorante La Strada (shown), on the Bay Trail, on Highway 29. The Highway is shown as double yellow lines on left side of map). After a late lunch, I headed North, walking along Highway 29, until I reached the intersection with Jameson Canyon/Highway 12.

Even though this stretch of Highway 29 had a shoulder that was wider than some, setbacks along highways are not my favorite type of trail; and there were three sections of Highway 29 with guardrails (narrowing the walking area further) from the restaurant to Jameson Canyon (Highway 12). 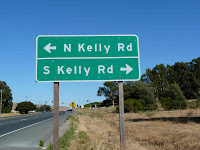 There was no easy pedestrian crossing at the intersection of Highways 29 and 12, and so instead of continuing to walk along Highway 29, I decided to head East on Jameson Canyon/Highway 12, to North Kelly Road (shown only as a white line on map above Jameson Canyon). Later this evening I would return to walk N. Kelly Road -- a road that parallels and then joins Highway 29 further North.

The only other human I encountered on my walk up the Highway was a man in a car who asked if I needed help or a ride. I appreciated his concern, but assured him I was out walking by choice.

On the animal and bird front, I walked by a cow pasture. I've found that cows are pretty wary of pedestrians. They're not used to seeing humans walking along highways, and they usually have kept an eye on me until I pass by. (See cow pictured at right.) I also was able to see two kites (birds), and was able to photograph one perched on top of a utility pole (see image at right).  My apologies to the crickets I bothered, when I walked too close to the dry grass on the side of the road, causing them to leap by me toward the highway (not the smartest move they could have made).