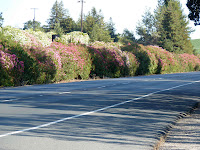 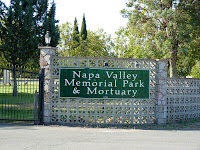 This evening I walked along Highway 221 (shown as two double yellow lines in the map to the right), as far north as Streblow Drive and as far south as Kaiser Road (not shown on map).

From my parking spot, I first walked North to the intersection (traffic light) of Highway 221 and Streblow Drive. I caught occasional glimpses of a golf course on the West side of the Highway; and I enjoyed the wide shoulder and oleander bushes growing in the median strip. This stretch of highway felt more bicycle- and pedestrian-friendly than many others.

At the intersection with Streblow, I heard the what sounded like loud bird distress calls, and an occasional screech of a red-tailed hawk. 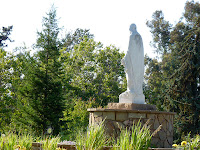 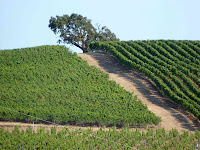 After spending a few minutes trying to spot the source of this apparent bird riot, I realized this was a recording, probably being played near a vineyard next to Napa Valley College -- perhaps to discourage pigeons or other birds from nesting in a nearby construction site. Less than a hundred yards south of this intersection, three "real" red-tailed hawks circled above. I wondered what the hawks made of all this noise nearby.

I walked South -- noticing a statue in the Memorial Park on the other side of a wire fence (see statue picture at right). Across the freeway, in the hills to the East, were more vineyards. When I reached the sign for Kaiser Road, then turned around and returned to my car.