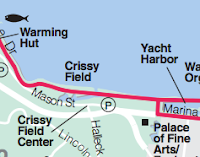 Another lovely summer afternoon walk that shaded into evening on the San Francisco Bay Trail. 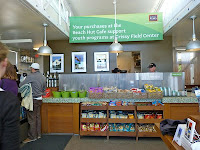 After a quick stop to see the new Inn at the Presidio (uphill from the Bay Trail and south east of today's walk), I parked just south of the Bay Trail, on Baker Street, adjacent to the Palace of Fine Arts and the Exploratorium. I didn't have any time today to explore the Exploratorium (which will be relocating to the Embarcadero), but I did stroll through the Palace of Fine Arts grounds at the end of this walk. 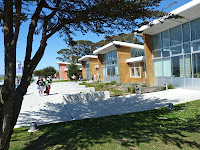 Heading north from Baker Street, I crossed the crosswalk at Marina Blvd. and followed the Golden Gate Promenade/San Francisco Bay Trail (west) into Crissy Field, stopping at the Beach Hut Cafe (next to the Crissy Field Center), for a chocolate bar and water break first. I then moseyed west along the combination paved and packed dirt path toward the beach/marsh area to do some dog- and people-watching, in one of the best, legal dog frolic areas in San Francisco. 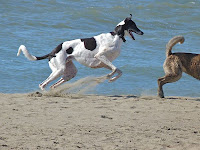 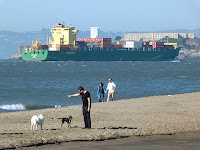 I continued to follow the Bay Trail (west), passing the Gulf of the Farallones National Marine Sanctuary, Ocean Climate Center, and related buildings to the north along the Bay. (The grass-covered Crissy Field was on the south side of the trail.) I'm glad they preserved these buildings; I'm a fan of this architectural style, or frankly any building that has a few curves and interesting/elegant architectural style.

I continued (northwest) on to the Crissy Field Warming Hut/Cafe, where I saw a young Brown Pelican hanging out within inches of the Trail -- a somewhat unusual sight. Tourists were stopping to take pictures, posing their young tots next to this bird, who after a while flew off to land at the end of nearby Torpedo Wharf. This pelican was apparently what Judy Irving, Executive Director of Pelican Media, called a "pier bum" -- fishermen were feeding it. I hoped it wouldn't get caught in any fishing line/hooks and then continued on my way.

After walking out on the wharf/pier and talking to a few of the fishermen who recognized this pelican as a recent regular, I walked back toward the Palace of Fine Arts, retracing my steps except for a short amble out to the beach. 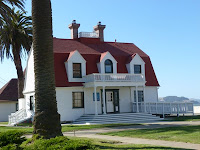 On the way back to the car, I cut through the Palace of Fine Arts grounds along a small lake, where I saw pond turtles, ducks and duckings lazing around in the water, and a swan family on the grass -- all a few dozen yards from where I'd parked the car. Seeing the five, fuzzy young swans with two adult swans in the shadows was a nice finish to the walk. 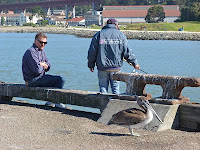 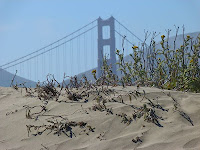 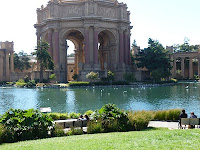 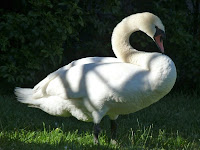 Posted by Corinne DeBra at 2:52 PM