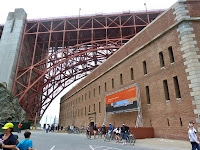 This afternoon I walked from the paved (asphalt) parking lot area (southeast) to the Crissy Field Warming Hut/Cafe (where I left off on yesterday's walk) and out to the end of the Torpedo Wharf/fishing pier to look for the brown pelican I saw yesterday. After spotting what I'm fairly certain was the same pelican sitting with two fishermen, I turned around and walked up (northwest) to Fort Point.

Fort Point is, as the name implied, is a historic fort located on a point, at the southern end of the Golden Gate Bridge. The Bridge recently celebrated its 75th anniversary. Fort Point pre-dated the Bridge by 70+ years. 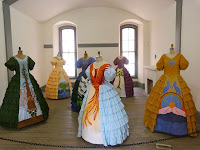 I had the chance to see the "International Orange" exhibit (named for the official paint color of the Golden Gate Bridge) at Fort Point. 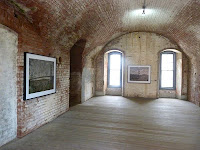 The exhibit consisted of works from several artists, including a room of period-inspired Fiesta Queens gowns, designed with images representing the different San Francisco Bay Area counties; a collection of tent camera photographs; a beautiful widescreen video projected on a wall of SF Bay scenes; an International Orange "store" -- and many others.

Exhibits were located throughout (on different levels of) the old fort structure, intermingled with historical exhibits.

I concluded my Fort Point visit by climbing up the brick-lined stairwells to the always breezy roof level of Fort Point. The underside of the Golden Gate Bridge, where one can listen to the ker-thumpity thump of cars rushing by above. 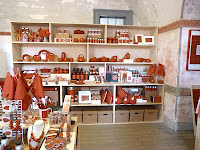 After seeing the exhibit, I walked back (southeast) along the narrow, asphalt road (Marine Drive, shown as double yellow lines on the Bay Trail map), toward the Crissy Field Warming Hut/Cafe.

I took the winding trail with flights of stairs leading uphill. The trail was a packed dirt trail in places. I passed some historic signage and enjoyed the view of the Torpedo Wharf below, and saw what might have been some old bunkers. 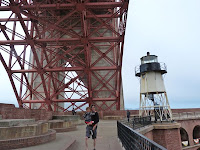 Eventually I reached the Golden Gate Bridge Information building and store, on the way to the pedestrian/bicycle approach to cross the Bridge. I looked around the store and also stopped at the Bridge Cafe to buy some Icelandic yogurt and chocolate; both structures had been recently renovated.

If you're lucky, you'll see a panoramic view of the Bridge, fog-free from the top of the hill. Or, the tops of the bridge towers could be shrouded in mist, as they were today. 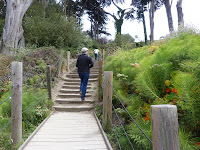 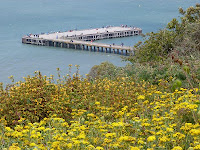 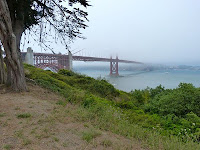