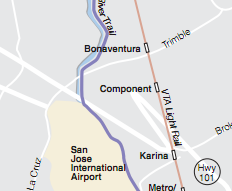 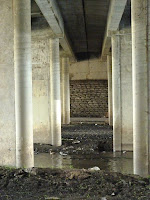 Having walked, unintentionally, south on the Guadalupe River Trail (shown as a purple line on Bay Trail map) yesterday, I made sure I headed north this afternoon. I soon crossed under Highway 101, and then the Trimble Rd. underpass. These concrete structures are cool and silent except for the muffled thurrumping of cars passing by above; they have a solemnity similar to stone cathedrals or catacombs.

After getting above ground again, I spotted a few mature walnut trees along a wire fence. I had been smelling green walnuts/walnut trees yesterday and couldn't see any. I grew up climbing three large walnut trees in my parents backyard, so I recognized the pleasant, green nut aroma. Hard to tell whether the plowed field on the other side of the fence (a rare bit of open space in between office parks and technology companies) was once a walnut grove or not. But, it was a fun trip down memory lane. 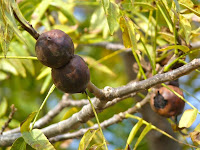 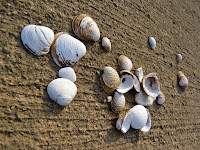 (near 2701 Orchard Pkwy, or the back of the building located at this address), with the single basketball hoop in the back. It helps to have an identifiable marker or two to make sure I've arrived at the right place.

Continuing on, I found a little pile of white sea shells on a concrete slope leading up to the freeway. I have no idea how these might have gotten here. Raccoon picnic?

On my way back, I passed by a gaggle of Canada geese, sitting on the trail, and nibbling on fresh green grass at the edge of the top of the embankment that sloped down into the Guadalupe River. I'm fairly certain these were the same geese I saw down by the River when I passed here the first time. Even though they are sandwiched between highway over- and under-passes, the geese had found a reasonably undisturbed area of riverbed to visit. 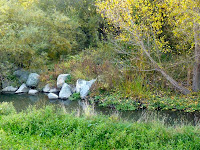 After this relatively short stroll this afternoon, I took the free San Jose airport shuttle bus over to the new terminal (Terminal B) to take care of an errand I needed to run, and to check in early for a Southwest Airlines flight tomorrow, since I was already at the airport. 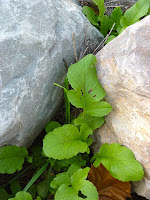 The Bay Trail runs by most of the major airports in the Bay Area -- San Francisco (SFO), Oakland (OAK); and, if you walk the Guadalupe River Trail (technically a connector trail to the Bay Trail), then you'll pass San Jose (SJC) as well. 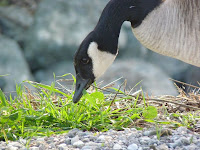 Posted by Corinne DeBra at 5:53 AM