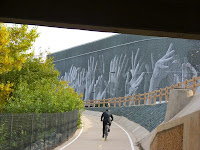 This afternoon I had planned to walk the Guadalupe River Trail (shown as purple line on Bay Trail map) from the San Jose airport north -- to the point where I left off a few days ago. I parked in the airport's long-term parking lot (flat daily rate of $15.00), and proceeded to look for the trail, which is adjacent to this large parking lot. 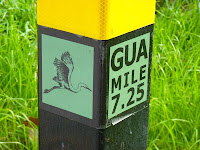 I enjoyed seeing the public art/design piece by Christian Moeller ("Hands") on the side of Terminal B at the airport (which opened last June). This large, black and white high-tech mural looks like a series of hands raised up -- accomplished by working out the design on a computer first I imagine, and then placing hundreds of small white plastic pieces on a very large mesh or screen background/wall. I went under an underpass and popped out the other side, and there the hands were - waving at passerbys. 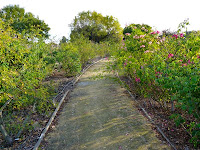 I should explain why I was seeing this mural...The Guadalupe trail fans out in a few directions at the airport. Instead or going north, I started walking south toward downtown San Jose, down a long stretch of packed dirt and gravel. And, since it was too late by the time I realized I was headed south vs. north, I made the best of it, kept walking, and eventually stopped at the Heritage Rose Garden in San Jose, south of the airport. (At this point, the trail continues south, but it is off the edge of the Bay Trail map.) The trail was dirt/gravel, then asphalt, then dirt, then asphalt again. Good for mountain bikes. It was great to stop and smell the roses, literally, before heading back. 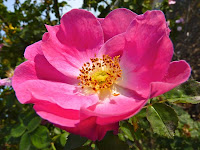 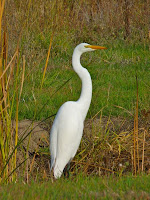 Posted by Corinne DeBra at 5:18 AM