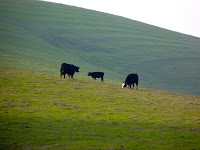 This afternoon I walked from the intersection of Franklin Canyon Road and McEwen Road (just south of Highway 4, also known as John Muir Parkway -- white line on map), up McEwen Road (the set of double yellow lines furthest west on map), as far as the driveway of a ranch house -- one of the few homes on this winding, two-lane road in the hills. 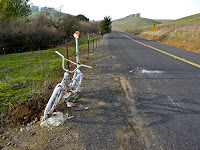 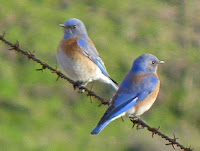 As I was getting out of my car, I talked to two men who were loading up items that had been left by the side of the road, including at least three dead Christmas trees, an old couch and some chairs -- all items I recognized seeing on Franklin Canyon or McEwen Road last week. (The chairs were even featured in this blog.) Hats off to these two for cleaning up after folks who were too lazy to drive to the dump.

It was fairly quiet, with just a few cars and pickup trucks passing by, making it easier to hear cows mooing, frogs croaking, a hummingbird singing, and a few killdeer crying and flying away in a panic, as they often do. The hills were covered with lovely green grass -- a short-lived occurrence in California. By April the hills will again be golden brown, the color of a sleeping lion.

I will continue to walk at least one more segment of McEwen Road, until the point where it narrows and there is no setback, or safe way for a pedestrian to negotiate this part safely.

After all, it's not advisable to be in the way of a car whipping around a blind corner of a rural road, at any time of day, especially one hour before sunset. And, as a very serious reminder of this risk, there sits a "ghost bike" memorial on McEwen Road that I passed, about 1/2 mile up the hill from Highway 4. Apparently a bicyclist was killed on this spot by a hit and run driver a few years back.

Wildlife Sightings:
85 little brown jobs (LBJs) - including 4 bluebirds; 42 cows; 4 killdeer; 1 hummingbird; 1 hawk and 1 hawk or turkey vulture; two old snake skins and bones. Heard sounds of frogs, but no sightings; the ones I heard near fence stopped making noise when I got about six feet away.
Posted by Corinne DeBra at 5:59 PM