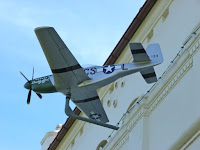 The portion of the Bay Trail in Novato located in the old Hamilton Air Force Base has the advantage of interesting buildings, history—and good parking. 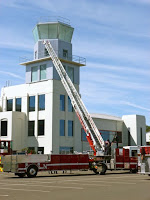 We stopped to look at a tiny plane attached to the Hamilton Field History Museum. The museum wasn't open, but we learned quite a bit just from reading the signage for the outdoor displays.

We parked in a large parking lot, behind Hangar 7, not too far from the old (air) control tower. The lot was also conveniently located to an entrance to the Bay Trail. After watching a fire truck performing a drill using the tower, we hit the trail. 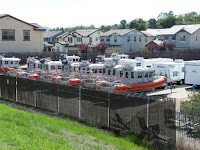 We walked up a short ramp and started walking on what looked to be a newly groomed dirt/gravel trail. (There was a trail further down by the water, on the other side of a low wall, and we took that on the way back.)

We walked south, passing a Coast Guard yard, with boats at the ready. Eventually the trail curved to right.

We followed the Bay Trail until we reached a ballpark (Palmisano Park) where I'd started on previous walk last month (February 2014), and turned around here. 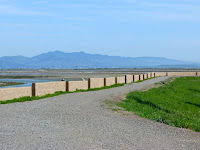 We came back on the packed dirt trail on the Bay side of wall. We kept going until we reached a "#1 marker" on wall; and turned around just past where 2 trails merged. Then we walked back to car in parking lot.

We enjoyed seeing a group of several large, graceful white swans, as well as a few lizards basking in the sun. 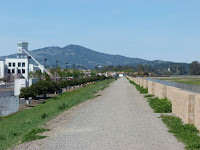 Thank you John for the great walk. 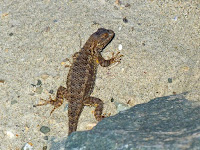