If you like boats, this would be a great walk for you. We started with a ferry boat ride from San Francisco (Ferry Building) to the lovely coastal town of Sausalito in Marin County. 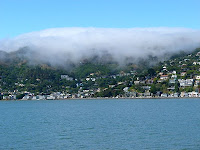 It was a beautiful day for a ferry ride across San Francisco Bay, with views of Angel Island on the way. As we pulled into Sausalito a thin layer of fog was curling over the tops of the hills, but it was a beautiful sunny day. From the ferry terminal we walked to Bridgewater, and headed north toward Harbor Boulevard. 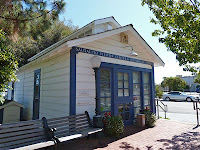 Along the way, we walked primarily on paved sidewalks and road surfaces, although we did take a few detours. For example, we walked along the wooden planked docks to see houseboats* and on paved dirt/gravel paths to check out Carl Dunphy Park and to see an art car. And we sauntered along a gravel/dirt road next to a boatyard, as we were looking for Gate 5 and Harbor Blvd. 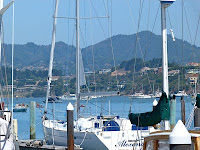 There were several interesting places to visit, and to eat and drink on this walk. We passed by the Visitors Center and Historic Exhibit building, but stopped at Cibo, a cafe in a brick building on Bridgeway, for some lunch. After our meal, we continued north and spent time taking a tour through The Bay Model. 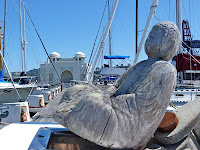 The Bay Model was a very large scale model of the San Francisco Bay that, run by the U.S. Army Corps of Engineers, that was open to the public. While more sophisticated computer models have replaced some of the original functions of this huge physical representation of the Bay (roughly the size of two large warehouses inside), the Bay Model Vistors Center represents a great learning environment for school groups and anyone else interested in knowing more about the history and geographic and hydrological workings of the Bay. In addition to short films and interactive displays, there was a tule boat, and an exhibit area with information about the building of ships during WWII. 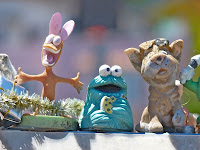 Continuing north, we visited a large building that housed dozens of artists studios on Harbor Blvd. (A small "Art" sign on the building that housed West Marine led us here.) And, last but not least, we took a trip into Heath Ceramics. We needed to get back to catch our ferry back to San Francisco, but if we'd had time we would have had some dinner there; we heard good things about "Fish" restaurant at the end of Harbor Blvd. Next time...

On the return Ferry ride back to San Francisco we cruised by Alcatraz Island, and were close enough to see details of buildings and structures there. 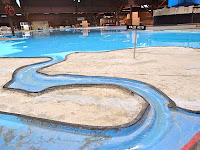 Thank you to Elise and Camille for joining me on this walk.