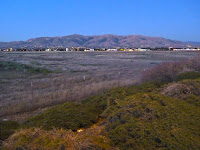 It was a warm evening for tonight's walk along the remaining (south-most) stretch of Cushing Parkway. I started from the intersection of Cushing Parkway and Fremont Blvd. and walked north on Cushing (shown as double red lines on the Bay Trail Map) as far as Bunche Drive. At the two ends of this stretch of Cushing Parkway were commercial buildings/businesses. But a large stretch of open space, and what looked to be ranchland, took up the middle part of this walk. The sidewalk along Cushing was lit by streetlights, enabling me to finish walking after dark. 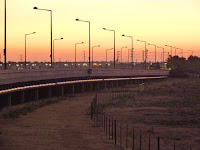 When I started this walk, the sun was setting, and a few crickets were chirping. Once the buildings thinned out, it was still light enough to see a herd of cows off in the distance toward the Bay. By the time that I reached the beginning of the row of well-lit automotive dealers (intersection between Cushing Parkway and Bunche Drive), it was completely dark.

The dead of night offers opportunities to see animals and birds not normally seen during daylight hours. On the way up to Bunche, I noticed a bird scolding some moving objects off to the side of the road and saw two gray foxes; and, on the walk back I was relieved when a small skunk dashed away from the sidewalk where I was walking, and not toward the sidewalk. I was able to see what I believe were two owls flying over a field. I'm including a few blurry night photos -- of the two gray foxes and one of a large praying mantis bug atop a large sage bush - that was in motion when this shot was snapped. More examples of the challenges of capturing images of shy critters at night (on the go, without a tripod). 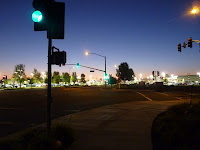 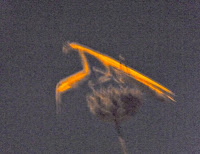