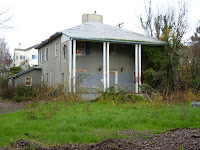 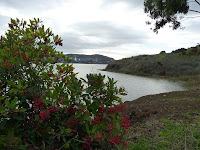 I first walked East (following what is a dotted line on the map near Glen Cove), past the deserted Stremmel mansion, and found the paved road/trail (shown as a red line) that led to the wooden sign -- just West of the Benicia State Recreation Area, where I'd ended my walk two days ago.

After I reached the sign and admired the view of the Carquinez Strait, I turned around and walked West - as far as the narrow, muddy (dotted line) trail would allow. 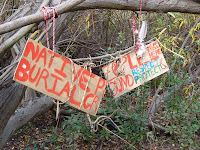 The trail narrowed, and at one point I reached an area that I thought might have been an improvised camp or children's fort under a tree; however, the hand-drawn signs hanging from some low branches advised passer-bys that these were Native American burial grounds; and asked that hikers please pass respectfully. It would be great if these facts were called out or recognized as part of the Park. But, it looks like the city may not have finished developing this area. Or, like many areas right now, funding may be an issue. 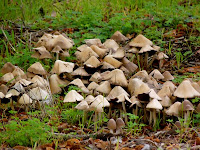 At some point the trail got even narrower, muddier and sketchier -- enough that I decided to turn around and walk back to the car. It's possible that it continued around the point, and into the next cove (Elliot Cove, where the Glen Cove Marina is located); but it was hard to tell. All the recent rain contributed to a bumper crop of wild mushrooms.
Wildlife Sightings:
20 ducks; 20 coots; 3 turkey vultures; 2 sea gulls; 13 little brown jobs (LBJs); 1 (bumble) bee; 1 (tennis) ball in reeds/water 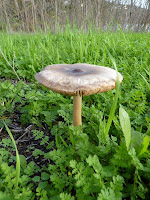