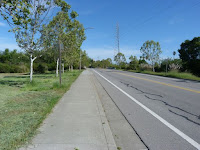 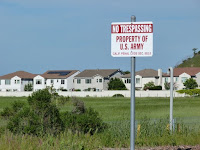 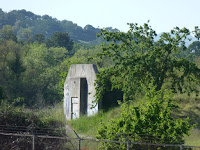 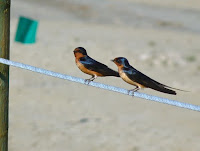 From the Novato Skatepark parking lot (1200 Hamilton Parkway), I walked southeast on Hamilton Parkway on the sidewalk, and made a left onto a trail that paralleled Aberdeen Road, that forked to the right and left. After exploring the right fork and returning, and then the left fork, I found the connection to a trail that would lead to the Bay Trail that would lead north-ish toward Bel Marin Keys. 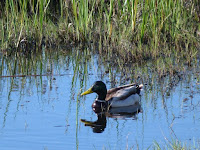 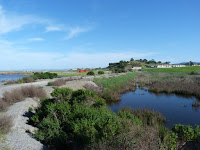 Walking through the old Hamilton Air Force Base, you'd hardly know there was a base there back in the 1970s, until you start seeing no trespassing signs, and old bunkers and cement walls poking through the grass amongst grass covered hummocks and a smattering of trees and brush. 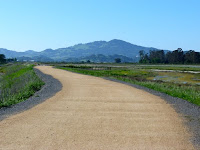 Soon enough I was passing marshes and enjoying a new section of Bay Trail. I followed trails that headed northwest to Bel Marin and took a left toward toward Bel Marin Keys and Pacheco Pond. 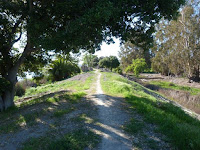 This led to a narrow, unimproved path that popped out on the other side onto Bel Marin Keys Blvd. From there I headed left (westish) and passed by Pacheco Pond on my left side. It was late in the day, and I enjoyed watching a swam glide by in the distance and the evening colors being picked up by the reeds, water and trees. 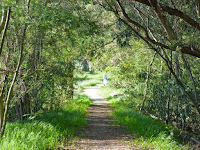 I continued (west) on the side of the road up Bel Marin Keys Blvd., until I reached a commercial, light industrial area where sidewalks began to appear. As I got closer to Highway 101, the road began to turn west and south. 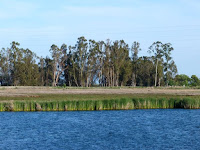 Closer to the highway, I went down a flight of cement stairs and followed a railroad right-of-way path for a bit before reaching a large shopping center (Hamilton Marketplace, 5800 Nave Drive, Novato, CA. 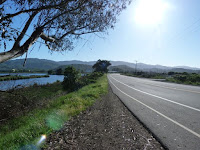 After traversing the shopping center and Safeway parking lots, I took a left onto Hamilton Parkway, passed the Marriott Courtyard Novato hotel, crossed the railroad tracks, and made my way back to the Skatepark. 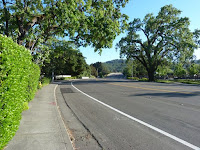 Restrooms are not glamorous, but they are an essential amenity for long, urban hikes. The freshly graffiti-ed portable restroom at the Skatepark was just what I imagined it would be. But, better having one here than nothing. 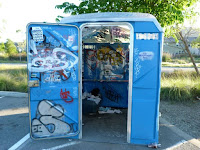