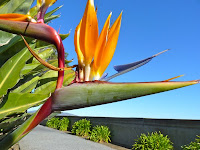 After parking in a public shore parking space near the trail, I first walked south to the spot where I left off last weekend. After reaching that spot (the City of Burlingame Wastewater Treatment plant), I headed north, passing Bayside Park/Fields (across the street) along the way. I walked to the end of the paved (asphalt) trail (shown as a red line on the Bay Trail map), over a rickety wood "bridge" that was a series of planks laid down on the mud creek bed. This crossing took me to a parking lot, behind some commercial buildings. 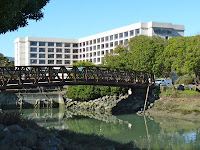 I traversed the parking lot, sticking close to the bay, but I didn't get very far before reaching a second creek (north of the Holiday Inn, and Max's restaurant). These little creeks aren't shown on the Bay Trail map.

This area was somewhat passable -- but was shown as a dotted line on the Bay Trail map, indicating that there was not a developed trail currently in place. If you ride your bike through here, I'd stick to (Old) Bayshore Highway all the way through this area. 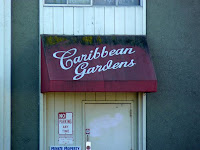 When I reached this second creek that emptied into the Bay (that wasn't crossable), I walked along the creek back (west) toward (Old) Bayshore Highway (a freeway frontage road). I walked (on a sidewalk) north along Bayshore until I reached the Bay Plaza building, where I was able to turn right and walk through their parking lot to the Bay (Trail). 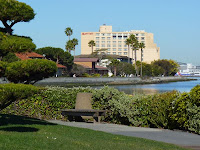 I continued north, past Fandorin and Benihana restaurants, and crossed a small bridge that was adjacent to the City of Burlingame Shorebird Sanctuary -- which did indeed have a nice selection of ducks, shorebirds, stilts and avocets poking around in the mud, at low tide, looking for food, when I passed by. 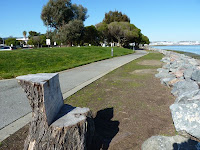 There were also a few different hotels that I passed, offering lots of choices for an overnight trip in this area. And I also enjoyed passing an old movie theater (which looked closed).  The design looked like it was from the 1960s, and when it was built it was likely might to look quite modern for the time, with interesting lines and shapes -- i.e., not a tilt-up rectangle. An awning advertised a Caribbean restaurant, but I think that was closed as well. If I passed by here again in another two years this complex might well be gone.


One restaurant that I passed, The Elephant Bar, had a menu that was posted in the back so that it faced the Bay Trail -- very handy for passers-by, who might want to stop for a bite to eat, or something to drink. 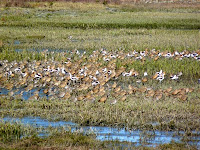 I crossed over a second metal bridge, and kept walking, passing through Bayfront Park/parking lot, to the end of the trail -- a small paved loop that ended at the Millbrae Gate.

As the map seemed to indicate a walk up Millbrae Avenue, I turned (west) on Millbrae Ave. (shown as double yellow lines on the map -- indicating it's more of a busy street than a trail; so proceed with caution). I turned around at the Highway 101 interchange, and walked back to Old Bayshore, and then followed the trail back to the car. 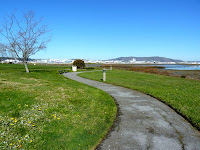 On the walk back, I saw four teenagers gawking at a live crab that had the misfortune of being in the wrong place at the wrong time (too close to passerbys). I hope it made it back to the water. 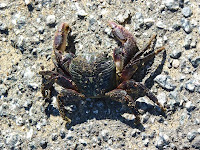